One of the most important days in a person’s life is their Wedding Day. It
is the day when two people unite, when their two families and all their
friends come together to celebrate the love and the bond that will exist for
the rest of their lives. This day will take countless hours to plan in an effort
to ensure every aspect will combine to make the day special and memorable.
Since our heritage is a part of us, many of our oldest customs and traditions
are often incorporated into the event …. a sharing of culture. Many of these
customs are considered a symbol of “Good Luck” and indeeed in this day
and age a young couple can use all the luck they can get.

Something old was the connection to family, something new for good luck,
something borrowed was a symbol of friendship, something blue considered
a lucky color in Ireland, a sixpence piece for her shoe so the bride would
never want. 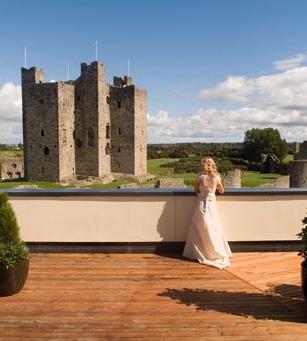 “Back in the “Good Old Days” most people got married in June because they took their yearly bath in May and they still smelled pretty good by June… However, brides carried a bouquet of flowers to hide the body odor. Hence the custom today of carrying a bouquet when getting married.”

Flowers have always been an important aspect of weddings. In Ireland the bride often wore a wreath of wildflowers in her hair . If the bride carried a bouquet she almost always put wildflowers in it. A sprig of shamrock was also considered good luck to be tucked in the bouquet.

A Horseshoe tucked into the bouquet also was a symbol of good luck and fortune.

The Magic Hanky is a linen hanky carried by the bride on her wedding day. With a few stitches the bridal hanky becomes a christening bonnet for her first-born. This keepsake will later become a wedding hanky on the fisrt-born’s
wedding day , and so the tradition continues……….

Another Celtic Tradition was to save the top-layer of the wedding cake for the Christening of the first-born.

Never wear new shoes on your wedding day, the fairies may steal the bridal couple away to Tir na n’Og – the land of eternal youth.

“The woman of your choice to you, Land without rent to you, A child every year to you………….And may you die in Ireland…..”

The Wedding Toast was traditionally mead – an ancient blend of white wine, honey and other herbs. In old Ireland mead was considered by the Celts to promote fertility. The honeymoon lasted for 30 days – or until all the mead was consumed. In ancient times Pewter Goblets were used, with the double handled goblet the bridal couple interlock their arms – as a symbol of unity.

The Wedding Coin has two versions, both of which can be used. A sixpence piece for her shoe – worn in her shoe for luck that she will never be in want. Another custom is that during the ceremony after the blessing of the rings, the
groom gives his new spouse a silver coin ….” I give you this as a token of all I possess….” it is a symbol of willingness to share all he owns or will own in the future. This keepsake is then passed down from generation to generation.

No wedding was complete without the bagpiper. He would welcome guests as they arrive. He would play again as the bridal couple left the church and as they arrived at the reception. Finally he would provide entertainment during the reception. If a bagpiper was not available a harpist could provide church and reception music. Fiddlers and bodhran could also fill the halls with the appropriate entertainment.

The Irish Gruchie: A custom whereby the bridal couple would cast a handful of coins to the guests, this was thought to bring good luck and prosperity to the newly weds.

The Pebble Toss: The Celts were very much in tune with nature and often would celebrate a wedding in an open area or beside a river, lake or well. Here all the guests would cast small pebbles in the water and make a wish
for the bridal couple.

The Oathing Stone An ancient custom in Ireland was for the King to be sworn in as the new leader adjacent to certain ritual stones (ie. The stone of Scone) To take such an oath or binding promise near an ancient stone was to make a
lasting committment, hence the term “Carved in Stone”.

Groom to the right, bride to the left? The Bride usually stands to the Groom’s left . In a time when many brides were by capture rather than consent, the groom could free his right arm to fight off family or foe. Still a custom!