Christmas in Ireland is the largest celebration of the year and lasts from 24 December to 6 January, although 8 December is traditionally viewed as the start of Christmas with many putting up their decorations and Christmas trees, along with doing their Christmas shopping.

The greeting for “Merry Christmas” in Irish is Nollaig hona Duit the literal translation of this is “Happy Christmas to you”.

Ireland is a predominantly Catholic island and, Christmas plays an extremely important role in both religious and secular aspects of Irish life. There are huge attendances at religious services for Christmas Day and Christmas Eve, with Midnight Mass a popular choice for Roman Catholics. In most homes in Ireland the traditional crib, along with the Christmas tree are part of a family’s decorations, and don’t forget the lighted candle in the window, decorated with holly, to light the way for Mary and Joseph along their journey to Bethlehem. The candle was a way of saying there was room for Jesus’s parents in these homes even if there was none in Bethlehem. Family and friends also give each other gifts at Christmas. In the older days Christmas Trees were less common as the houses were small and there just was enough room

The traditional Christmas dinner consists of turkey or goose and ham with a selection of vegetables and roast potatoes. Desert would traditionally consist of a Plum Pudding, served with brandy being set alight and poured over it. The Plum Pudding would be cooked months ahead and hung in gause – in a cold place – to season and for all the fruit flavors to intensify. The table would be set with Christmas Crackers – party favors – Christmas cake, yule log and mince pies with equally rich sauces such as brandy butter. On Christmas Eve fish is traditionally eaten as a form of fasting before Christmas.

Grafton Street, one of Dublin’s main shopping streets during the Christmas shopping season Irish people spend more and more money each year on celebrating Christmas. Still every town had their own “Grafton Street” for those who could not make it to the big city.

Today, Christmas trees are erected by public authorities. The village of Slane had a Christmas tree inserted in 2008 for the first time that decade. Christmas trees officially go up on 8 December because according to Christian tradition the immaculate conception was on this date. Trees are a relatively new concept in Ireland. Fifty years ago few families had trees and the children found their gifts on the end of their bed Christmas morning. Back then Santa was called Father Christmas today Santa is recognized universally.

Almost the entire workforce is finished by lunchtime on Christmas Eve or often a few days beforehand. Christmas Day and St. Stephen’s Day are public holidays and many people do not return to work until the next week day after New Year’s Day. On St. Stephen’s Day the tradition is for the younger children to dress up in costume and “Hunt the Wren” Here they would entertain their neighbors with a tune or a dance in hopes of a few pence contribution to “bury the wren” 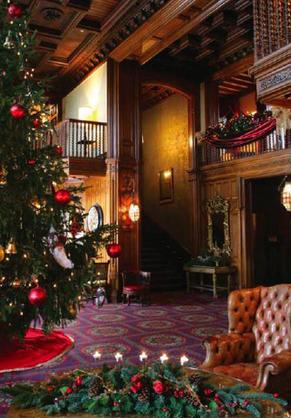