Irish jewelry is the probably the most quality conscious jewelry in the world. Every piece that is sold must bear the Irish Hallmark which is independently verified by Dublin Castle Assay office which is your guarantee of quality and your piece has this.

The Assay office in Dublin has been in existence since 1637. It is organised and run by the Worshipful Company of Goldsmiths of Dublin who are representatives of the jewelry trade in Ireland.

The function of the Assay office is to ensure that the various gold, silver and platinum alloys measure up to declared standards. Example, 18kt gold should contain 750 parts pure gold per 1000 parts i.e. 75% pure. The other 25% will be made up of different alloys and precious metals like Silver, Bronze,Copper,Zinc etc.

Each manufacturer and wholesaler is obliged by law to submit all his products to the assay office for testing. If the standards are not met the product will be destroyed or marked with a lower carat stamp i.e. 13.95 can only be marked as 10kt. So all Irish made jewelry will actually have more gold content then specified.

This stringent adherence to high standards ensures that the consumer is given maximum protection. 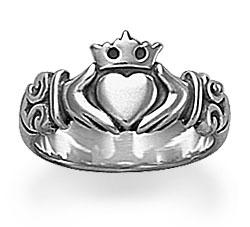 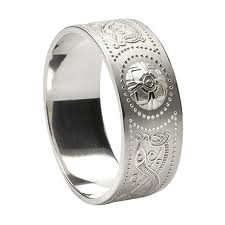 Ancient Celtic Crosses, some dating pre-christian can be found throughout Ireland. The High Crosses found throughout Ireland today,are roughly 1,000 years old. Time and the elements have eroded much of their former glory however their is still much to appreciate. During Irelands monastic period many Irish Chieftains sponsored these elegant monuments to be built for the Monastery or Abbey in their domain. Here the monks could explain the stories in the bible, to an illiterate congregation simply by using the pictorial carvings on the cross to help them visualize the events as told in the Holy Book.

Some stories credit St.Patrick for introducing the Celtic Cross. The celts had a sacred standing stone with a circle representing the Sun or maybe a moon. Patrick is said to have placed a latin cross over the center of the circle, thereby creating the first Celtic Cross.There are many interpretations of the cross. Some say the horizontal arm represents the earthly world, and the vertical portion represents the heavens. Another interpretation is that the number four held great significance for the early Christian Celts with the four arms representing north, south, east & west, or fire, air, earth & water, or maybe mind-body-soul & heart. Lest all this might be lost, jewelers have practiced their trade creating beautiful Celtic Crosses from Pewter, Silver and Gold, that we can wear everyday to remind us of the rich culture we have inherited from our ancestors.

Irish Eyes carries an extensive selection of Celtic Crosses by Ireland’s leading jewelers and crafts people – you owe it to yourself to stop by and take a look. . 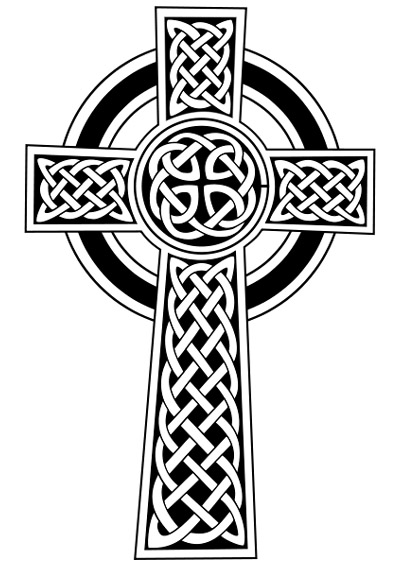 During Ireland’s monastic period 550 – 1150 the monks were amongst the finest artists and metalworkers found anywhere in the world. In fact their skills were so well respected even the Vikings- far to the north envied their work, and so much so that they would raid the monasteries along the coast to acquire these precious works of art.

The Vikings eventually they found it necessary to forray further inland to find other monastries that had not yet been sacked.The monks also were learning not just their crafts but also the need to protect their treasures from invaders. At first the monks built tall round towers, with the lowest door some thirteen feet above the ground. These doors were very narrow and were easy to defend, but over time the Vikings adapted new strategies , that would yield the same results as before – to acquire as much precious works of art, as they could carry.

The monks began to turn to local chieftains for protection. The local Chieftains were quite happy to defend the monastery, but it could take some time to raise an army on short notice, so the monks employed other tactics as well. When a raid was imminent, the monastery would send one monk, on horseback, to the Chieftain and another monk or monks would take their treasures off and bury them.

In the case of the Ardagh Hoard we can assume with some certainty that on his return the monk was captured, but never divulged the location of the chalice and other treasures. The Vikings probably killed him trying to extract where the treasures were located. Refusing to surrender them he was probably tortured and put to death. This is exactly what happened with the “Ardagh Hoard.” About 150 years ago two young boys found Ireland’s greatest find of ancient metal craft buried in a bog, in Co. Limerick. The Ardagh Chalice is now on display in The National Museum in Dublin, with it’s contents. Select jewelers from Dublin made castings from the rim of the chalice and created a line of jewelry and called it The Celtic Warrior, in honor of the monk who gave up his life in defense of their precious works of art created in the service of his God.

The trinity knot also known as the “Triquetra” is an ancient Celtic symbol and one of the earliest symbols of Christianity, that predates the crucifix. From time to time in Irish Art you will find three fish in a similar shape. This religious interpretation probably stems from the word “Trinity” and the Father, Son and Holy Spirit. It has also been said to represent: earth, Wind and Fire or mind, body and soul. It is often called the love-knot, ongoing , no beginning and no end. It is the simplest form of a celtic knot. Frequently it holds a special attachment for Grandmother, Mother and Daughter.